Sometimes all you have to do is open your heart and be a friend by lending an ear, a hand, or a small act of kindness. It can change a person’s life. That’s what gives life meaning….the people who touch our lives and the people whose lives we touch. 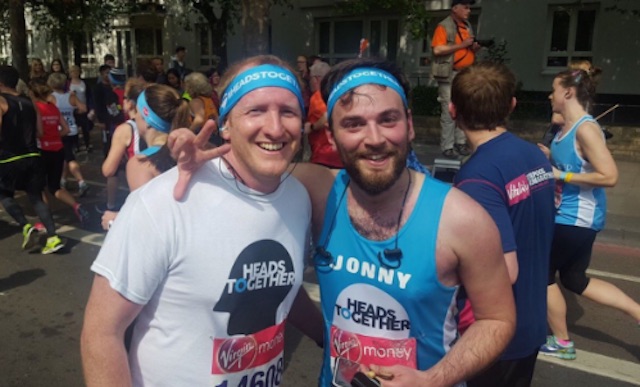 Nine years ago, Jonny Benjamin was perched on the edge of a bridge ready to take his own life – and he is still alive today thanks to Neil Laybourn talking him down.

Then as of yesterday, the two crossed the finish line of the London Marathon together.

The duo completed the 26.2 mile challenge in 5 hours and 28 minutes as a means of raising money for Heads Together, an organization created by the three Royals (Prince Harry and the Duke and Duchess of Cambridge) to educate people and communities on how to properly deal with mental illness.

Jonny himself was diagnosed with schizoaffective disorder, a combination of schizophrenia and bipolar, at the age of 20. When Jonny finally stepped up to the edge of Waterloo Bridge nine years ago in preparation to take his own life, Neil stopped to speak to talk him down. The two conversed for 25 minutes until medical officials arrived.

Neil and Jonny didn’t reunite after the suicide attempt until 2014, when Jonny launched a social media initiative to track down the stranger who showed him kindness.

Since he was saved from jumping off of the bridge, Jonny and Neil have become the best of friends and spokesmen for suicide prevention. The buddies even personally met with the Royals, who asked them to run the London Marathon.

Jonny himself has become a mental health advocate, YouTuber, and public speaker on the struggles of living with mental illness.