A Reminder for all of Us! 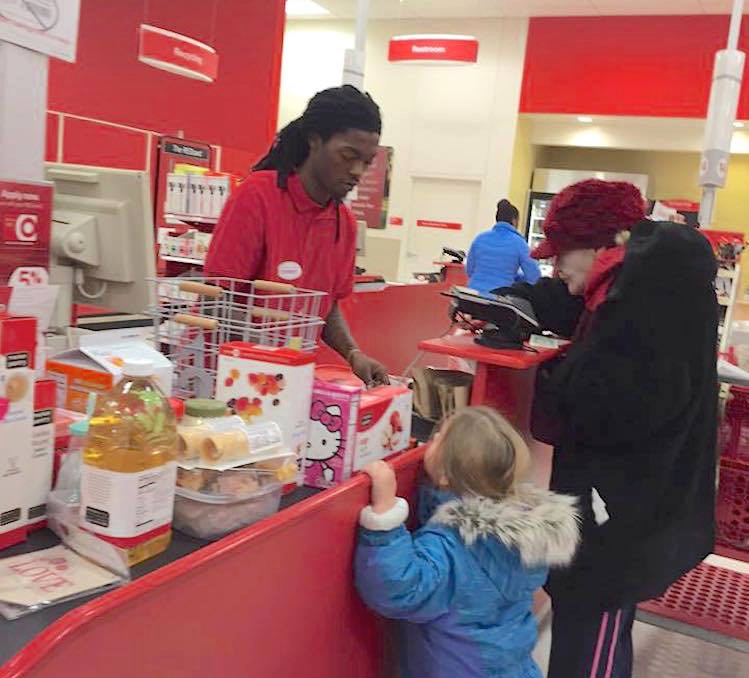 Sarah Owen Bigler hoped to be in and out of the Target store quickly.

With a toddler suddenly fussing in the cart and a young daughter in tow, she found a line with just one person it. But her pace slowed quickly and she became slightly annoyed when she saw the elderly woman ahead of her who was slowly counting change to pay for her items–one by one separately.

“Part of me… was frustrated with this woman and the inconvenience she had placed on me, but then I watched the young employee with this woman. I watched him help her count her change, ever so tenderly taking it from her shaking hands. I listened to him repeatedly saying ‘yes, ma’am’ to her. Never once did this employee huff, gruff or roll his eyes. He was nothing but patient and kind,” recalled Sarah in a Facebook post Wednesday.

Then, she noticed her daughter, Eloise, who was watching, too.

“I realized I hadn’t been inconvenienced at all. That my daughter was instead witnessing kindness and patience and being taught this valuable lesson by a complete stranger; furthermore, I realized that I too needed a refresher on this lesson.”

She snapped a photo on her phone to help bring praise and credit to the ever-patient employee, who had actually been working at the Glendale, Indiana store for only a few days.

“When the woman was finished, the employee began ringing up my items and thanked me for my patience. I then thanked him for teaching us patience and kindness by his treatment of that elderly woman. And although my timeline for target was askew, when Ishmael was finished I pushed my cart through the store trying to find the manager. I wanted her to know of the employee’s, kindness and patience, and how much it meant to me. After tracking her down and sharing the story with her, we left Target with a cart full of consumable items, but, what is more, a heart full of gratitude for such an invaluable lesson.”

Ishmael’s mother came to see him interviewed by a local news station, after Sarah’s photo was picked up by the media and shared thousands of times on Facebook. She asked him what he learned from the experience. “He said hopefully he will inspire others to be kind and treat everybody like you would want to be treated.”

“I felt very proud that this young father was being acknowledge for his outstanding customer service and positive energy in the workplace,” wrote mom Amiee Smith Gilbert on Facebook. “I have always tried my best to raise my children to respect everyone no matter their race, age or gender.”

Target has said he will be receiving a gift for his outstanding customer service.